Why do roosters crow in the morning? 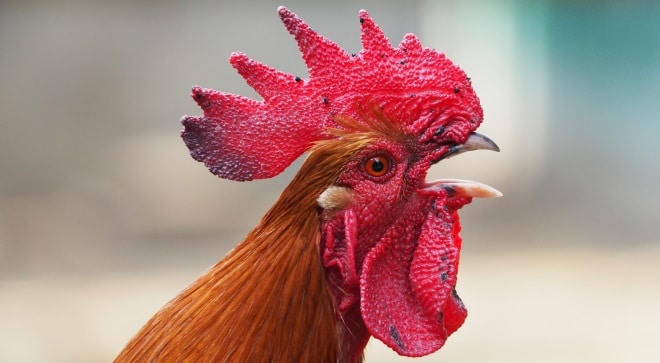 It’s important for us to point out that roosters will crow at all times of the day and for many different reasons such as a reaction to a type of sound, a disturbance, or when guarding their territory. They also perform this activity when they feel threatened or just communicating among themselves. Roosters really aren’t picky when it comes to excuses for crowing.

Roosters Crow in Response to Light

Roosters have been observed to crow at all times of the day and in response to even the most mundane of stimuli. The reason why they are known to typically crow just before or at the crack of dawn is a response to the changing levels of light and has been proven that they even crow when they see car headlights or other artificial light sources.

Roosters crow to Assert their dominance

Another interesting fact is that the most dominate rooster is the one who would start the crowing off.  Roosters with a higher social rank crowed first. Younger crows, often of a lower social rank, would patiently wait to send out their crows until after they had heard the calls of the other roosters. The roosters in auditory proximity to each other will use sound to stake territorial claims. Roosters lower on the pecking order—smaller, weaker, younger—have to wait their turn.

Roosters Have an Internal Clock

Roosters crow because they have an internal clock. This particular clock helps them anticipate daybreak. Most of them crow some hours before dawn.  Like other birds, roosters sing or crow in a daily cycle. Almost all animals possess daily cycles of activities that are commonly referred to as circadian rhythms. These activities follow the cycle of the night or day randomly. So, when it is sunrise, your roosters will anticipate this period and crow for a while. At the same time, their anticipation of daybreak helps them have a head start on their routine hunt for food.

Roosters Crow to Defend Their Territory

Basically, those ear-splitting caw-caws serve as a warning shot, a way for a rooster to establish its territory with the morning light. The crowing sends a signal to other rivals, telling them not to trespass unless they are ready for a brawl.

The intrinsic need to establish territory is also why roosters will often climb to higher ground to crow, as they have a better vantage point in order make sure that no other roosters trespass on their marked territory. Also, on higher ground, the rooster’s crow can travel much farther, allowing more roosters to hear and heed their warnings.